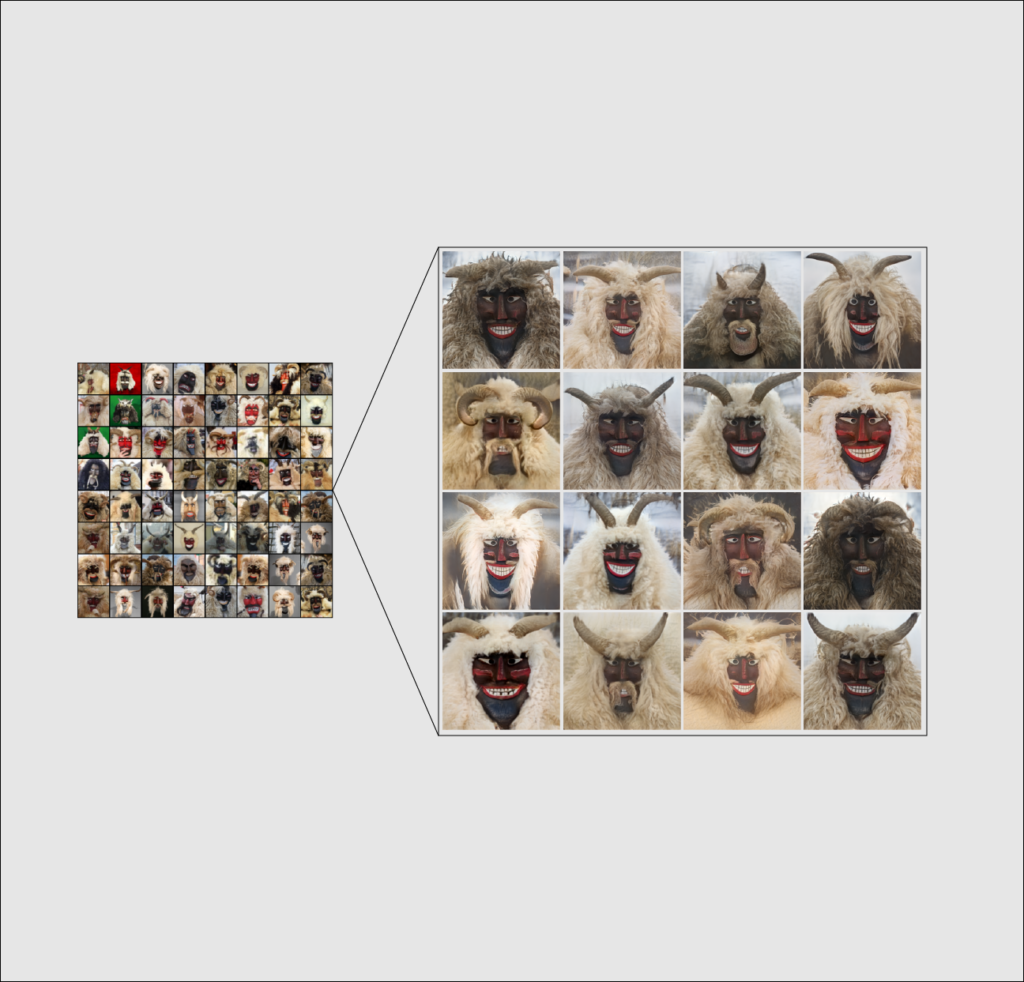 “This Tuesday, the students of the alliance organized an open Student Board meeting to discuss our countries’ Spring traditions while showing each other some of the students’ works connecting to this time of the year.

Firstly, the Latvian Aurelija Rancane (LMA) was presenting her projects assimilating Latvian masking traditions. Her family organizes every spring the International Mask Traditions Festival, where people can show and celebrate wearing their unique costumes expressing their respect and connection to seasons and nature. She also participated in collaboration as a costume designer with a Latvian music band called Tautumeitas.

The second artwork was made by Barnabás Bácsi (HUFA). For his artwork, he collected hundreds of Busó masks. Using a program, he could create non-existing faces by blending all the Busó masks. Every year, there is a festival in Hungary, which we call Busójárás. Legends have it that the inhabitants of Mohács managed to protect the village in 1687 by scaring the Turkish army away with the help of creepy wooden masks. Since then, every February, people come together on the streets of Mohács to scare the winter away.

In the next round, a student from Dresden, Friederike was talking about a German tradition called Easter Riding (Osterritt). During this ceremony, people are riding around the streets in a form of procession to represent the announcement of the resurrection of Jesus Christ.

Continuously, Michele from Italy (RUFA) was telling us about a festival of Ivrea whose other name is the Battle of Oranges where thousands of people are grouped into nine teams whose members are fighting by throwing oranges at each other. This traditional event is held every February. The origins of this huge food fight go back to the 12th century when an infamous landlord wanted to exercise the “droit du seigneur” (lord’s night) with a miller’s daughter. The young girl decapitated the landlord so that she could escape, and the populace went to the palace to burn it down. After this incident, each year, a young girl is chosen to play the role of Violetta, the miller’s daughter, and then the fight starts to remember their liberation.

Another Italian student, Aurora (RUFA), who has Sardinian origins, was talking about a festival which is known as ” Il Carnevale di Sardegna”. The inhabitants of different villages celebrate together in traditional costumes expressing their respect to the king, Giorgio in the hope of fertile soil and a good crop.  The most famous characters of the carnival are the mamuthones who are people dressed up in big furry coats with bells and scary masks, which are pretty similar to the Hungarian Busó costumes.

At the end of the meeting, we discussed our feelings about our traditions and why it is important for us to preserve them. It was fun to learn about these traditions presenting them proudly and see our differences but our similarities, as well.”

Gréta Kudela, HUFA
(The artworks in the article were prepared by Aurelija Rancane – LMA, and Barnabás Bácsi – HUFA.)