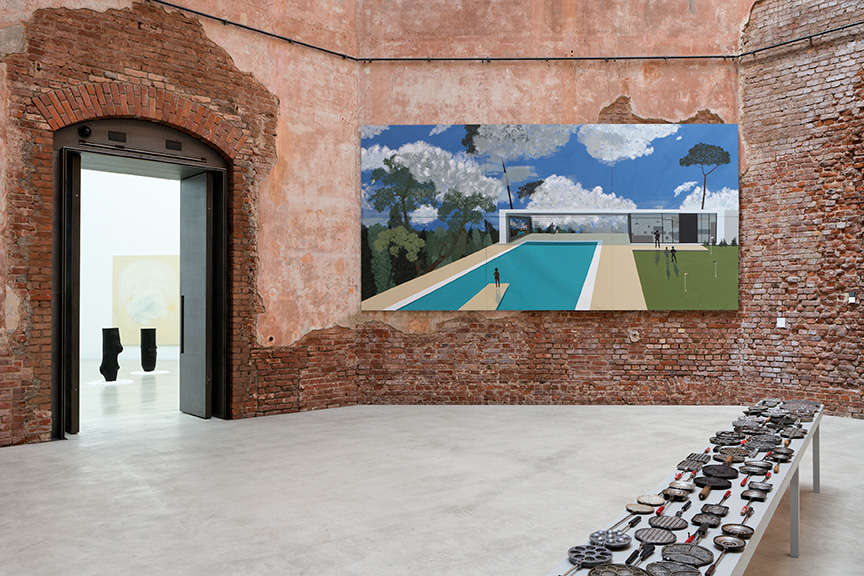 On May 05, 2022, the time had finally come. The joint exhibition “Vom Überschreiten / Transitioning” of the four alliance partners Budapest, Dresden, Riga and Rome opened its doors in the Oktogon, the Kunsthalle of the HfBK Dresden. Led by the curatorial team, Susanne Greinke and Frizzi Krella, an exhibition was created that takes up the term “Vom Überschreiten / Transitioning” in the most diverse ways and at the same time describes the work within the project over the last two and a half years.

Like the entire alliance work, the exhibition also embarks on a special journey. In retrospect, almost the entire project run phase took place in virtual space, which gave the aspect of transcending a whole new dimension. Meetings with the partners were only possible to a limited extent. Getting to know each other’s premises, structures, teaching methods and artistic work at the academies could only be practiced minimally.

It became all the more interesting with regard to the selection of works for the joint exhibition. The curators Susanne Greinke and Frizzi Krella traveled to the partner academies after the first relaxations in the spring to get an idea of the works on site. The students’ work at the respective academies, the discovery of analogies and cultural influences in the works, but also in the respective cities, is the narrative carried by the exhibition. Time as an essential factor also played an essential role – arising from the tradition of the respective universities and European cities and now accumulated in the exhibition – precisely an accumulation of artistic approaches that transcends boundaries, perhaps even points beyond itself and builds a bridge from the past to the present into a distant future.

This narrative continued at the opening of the exhibition on May 5 in the Oktogon. The exhibiting students, a large delegation from Budapest, Riga and Rome, as well as numerous other guests were welcomed by the Rector of the Dresden University of Fine Arts, Matthias Flügge and the Rector of the current Alliance Leader Budapest, Istvan Eröss. The Prime Minister of Saxony, Michael Kretschmer, the Mayor of Dresden, Dirk Hilbert, and Anke Stahl from the national funding institution of the German Academic Exchange Service (DAAD), also welcomed the guests and once again emphasized the importance of European projects in the context of higher education.

The exhibition was also a prelude to the DAAD’s European Higher Education Week, under the patronage of the BMBF, which focused in particular on German universities in the spectrum of European higher education alliances around Europe Day on May 8. How do students and staff envision the study of the future within the European Union? What does it mean to study in Europe and what kind of responsibility do we have to deal with? Particularly in view of the current crises to be overcome, these questions seem more topical than ever.