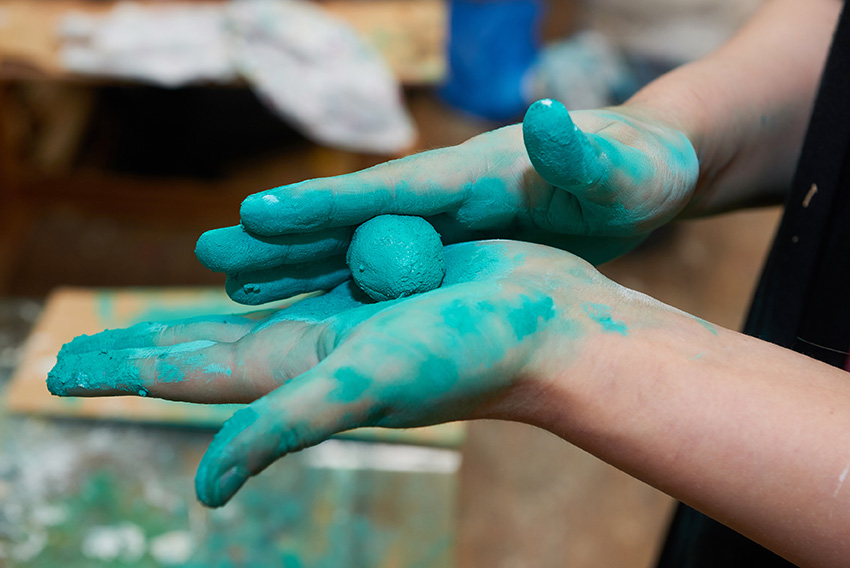 From 1 to 12 November 2021, short-term workshops took place at HfBK Dresden as part of the EU4ART project. Students from the EU4ART university alliance, consisting of the art academies in Budapest, Dresden, Riga and Rome had the opportunity to participate in workshops on graphics, painting and sculpture. The courses were accompanied by a theoretical portion led by art historian Susanne Altmann.

During the first week of the painting workshop, participants were introduced to the origins of pastel painting under the guidance of Maja Drachsel (Workshop for Painting Techniques). Pastel painting began in the 15th century with the introduction of red chalk pencils – red chalk belongs to the mineral pigments, consisting of a soft mixture of clay and hematite called iron oxide mineral. Course participants were able to admire early works made with red chalk.

After that, participants began to make pastel crayons using milk as a binder. Later in the workshop, additional recipes for making crayons were tested. With the first crayons in their pockets and armed with a sketchbook, course participants went to the Old Masters Gallery, part of the Staatliche Kunstsammlungen Dresden (SKD), to draw in the temporary Johannes Vermeer exhibition. During another visit to the Old Masters Gallery, the focus was on pastel works, such as portraits by artist Rosalba Carriera or artist Entienne Liotard with his famous work The Chocolate Girl.

In the workshop, more and more chalks in various shades, in gradations of black and white and with different binders from milk, whey, beer, honey, gelatine and gum arabic were produced, then used for two hours on three consecutive days of portrait drawing from a model. In addition to discussions about the pictures, participants analysed and compared the quality of the chalks, the prepared surfaces and the advantages and disadvantages of the painting technique. Participants also gained a unique insight into the collection of the Städtische Galerie, which exhibited pastels by artists from Dresden from the 19th century to the 1980s.

In the course, there was plenty of time to experiment with structures, chalks, ink and a mixing technique with egg tempera. Participants also made ink from gallnuts,  which are growths that occur in autumn on the underside of oak leaves. A gallnut is formed by the eggs laid by the gall wasp. The decoction of coarsely ground gallnuts provides deep dark compounds with iron salts that can be used as black ink. In addition to preparation and experimentation, the focus was always on the exchange between participants and mutual learning, which was a positive challenge due to the communication in English.