“Viscosity and Swamp – States between Stagnation and Motion” 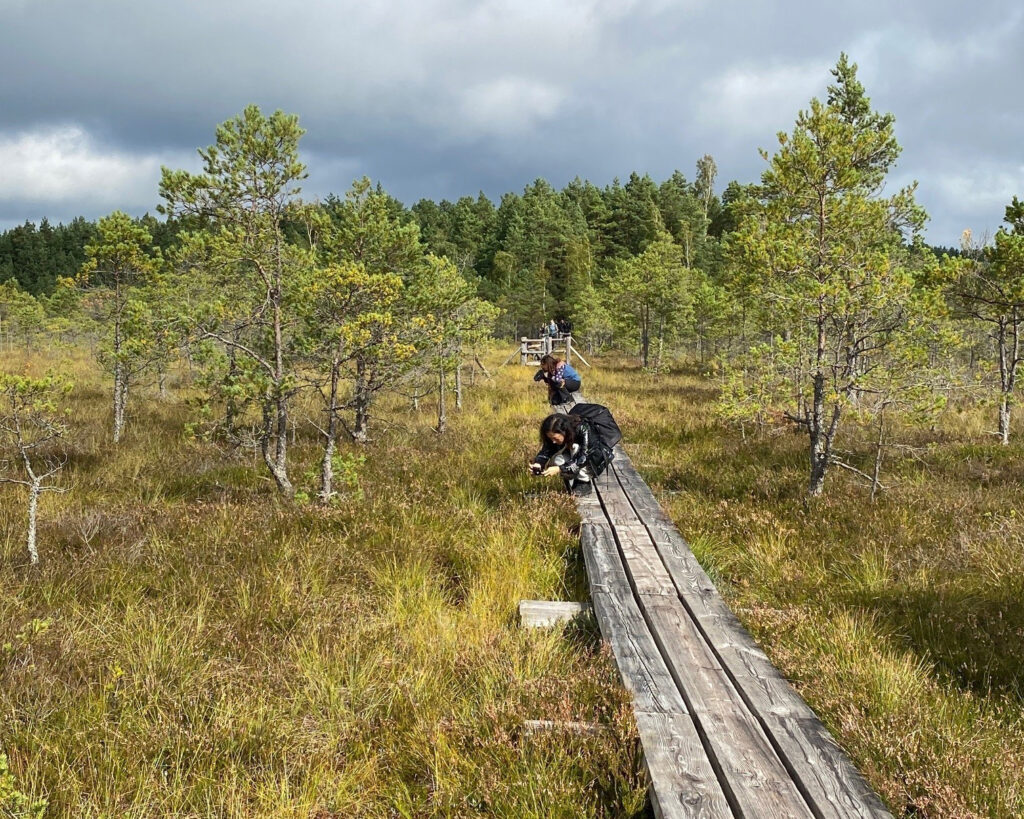 From September 12 to 18, an crossed-faculty excursion of the HfBK Dresden to Riga took place under the theme “Viscosity and Swamp – States between Stagnation and Motion” as part of the EU4ART project, coordinated by Prof. Dr. Stefanie Wenner (Applied Theatre Studies), Prof. Dr. Kristin Marek (Art Historian) and Stefanie Busch (Artist and EU4ART member). A total of 34 students participated, including 2 students each from Riga, Rome and Budapest.

On the subject of the excursion:

Viscosity is a scientific category of physics and here a central characteristic of fluids. As a measure, viscosity describes the flow behavior of fluids; the lower the viscosity, the easier the flow, and the higher the viscosity, the more viscous and thick. In physics, viscosity refers to the process of friction between molecules, i.e. the resistance of fluids to flow, and is particularly important in printing technology. The botanical term viscum, however, has been associated with birdseed for much longer. Here it refers not only to the mistletoe plant itself, but also to a sticky glue obtained from its secretion. Mixed with other sticky substances such as honey, it was used from antiquity until the 19th century to make glue rods to which the birds got stuck

Marshes are also perceived as tough and are associated with inertia. They are common near Riga and, for example, Dresden is also characterized by them. Drježdźany, the Upper Sorbian name of Dresden, derives from the Sorbian term for swamp or floodplain dwellers. This is because before the deepening of the Elbe for navigation, there was a swamp at that ford, where the first settlers probably settled in the Stone Age, which gave the city its name. Swamp is generally the name of an area that, through cycles of flooding and drying, creates humus that forms fertile soil. Quite contrary to the more colloquial pejorative sense, the swamp can be considered a place where life begins. While the bog is enclosed and peat can form there, the swamp is more ambiguous in its existence and dependent on seasons, for example. In the history of European civilizations, marshlands were drained to get them under control and bogs were used for peat extraction. However, the stagnation of water there was not only the basis for biotopes in each case, they also have far-reaching climatic significance.

Against this background, the seminar in Riga is devoted to the figures of the viscous and the marsh. Located constitutively between stagnation and movement, the viscous connects these states in a specific way, faltering, decelerating, slowing down and yet moving, flexible and permeable. We will reflect on and discuss this together in different places and on the basis of some texts.

Already the journey by a ferry across the Baltic Sea from Travemünde to Liepaja was under the theme of swamps and marshes. Then the journey was continue via bus to Riga. After a total of 33 hours, the group finally reached their accommodation in Riga. In Riga, a diverse program was on the agenda, including a tour of the Art Academy of Latvia and a visit to several museums. The excursion focused on the visit to the swamps of Kemeri (National Park near Jurmala) together with the author Santa Remere from the “Homos Novus Festival” (International Festival of Contemporary Theatre), which took place in the swamps of Kemeri last year.